Speaking of "Empire State of Mind" 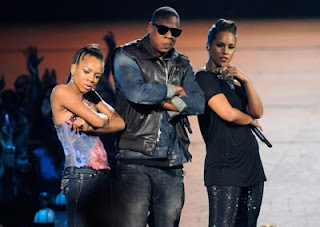 So i came across this surfing the net...

Has Jay-Z become NYC’s leading man? I remember when I first played Jay’s “Empire State of Mind” back in August and that first guitar lick which laid directly under a solid kick drum automatically separated itself from the rest of the material on “Blueprint 3.” Al Shux, the track’s producer, knew exactly what he was doing.

Well fast forward to November 25, the track hand delivered Hov his first #1 single on Billboard’ Hot 100, it possessed Lil Mama’s irrelevant ass to hop onstage during Hov and A.Keys’ monumental performance at the VMA’s in September, became the official N.Y. Yankees World Series anthem and has everyone from Australia to the Bronx praising the Big Apple.

With that said, MSG.com is letting the people decide whether or not “Empire State of Mind” deserves the accolades of “Unofficial Anthem” status for the city of New York. On December 4th (Hova’s date of birth), MSG will air Jay’s “Answer The Call” concert from September at 10:30pm and then follow up with Frank Sinatra’s, “Frank Sinatra: The Main Event” concert from October 1974.

After the concerts, you can head over to MSG.com to vote if you think Jay’s, “Empire State of Mind” should replace Sinatra’s, “New York, New York” as the Big Apple’s unofficial anthem. King of New York, 50? Riiiiiiiiiiiight. But hey, I still like your aggressive content. *Jay-Z Laugh* Hahhahahahahaha. THOUGHTS????

Low “I love NYC, but ain’t no place like Jersey. YEAH, I SAID IT” Key

I say it is the new anthem for our beautiful City. Old doesnt always mean better and it's a different New York than it was back then, why not change things up? HOV!
Posted by Skyywalker at 11:22 AM

Email ThisBlogThis!Share to TwitterShare to FacebookShare to Pinterest
Labels: a good look, clap for em, Jay-z