So I caught Transformers over the weekend and I gotta say I really enjoyed it. 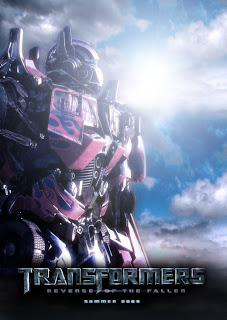 A lot of people have been complaining that this one wasn’t as good as the first because there was entirely too much going on in the film and some of the plot gets “lost”. Another complaint that ive been reading a lot on the internets is that was too much, “potty humor” in the movie.

Now that’s were a differ, I guess I can see why Transformers purist would be upset, but im a sucker for “stupid comedy” I find it hilarious. Take the twin bots and the controversy behind them. Did I notice that they were ‘black”, couldn’t read, spoke in slang, had a gold tooth, etc….. Yes, yes I did. But I gotta say I still found them funny, sad on my part? Maybe.

Overall, is it a story-telling masterpiece, far from it. But it IS a great action movies and a terrific way to kick off the summer.
Posted by Skyywalker at 2:02 PM