LMAO @ the quote, "I've never had a credibilty problem, and still dont" 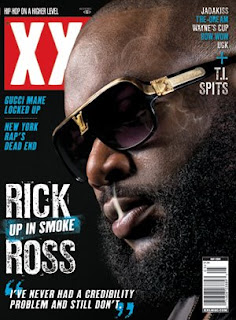 Those LV glasses Lt. Ross are rocking are type hot right? Here's what LV had to say to XXL...
Dear Editor:
We were dismayed to see the cover of the May 2009 issue of XXL Magazine, which features a photo of Rick Ross wearing a pair of sunglasses prominently featuring counterfeit Louis Vuitton trademarks. Because the photo has generated considerable confusion among your readers and Louis Vuitton customers among others, we feel it is important to clarify several points.
The first is that the sunglasses Mr. Ross is wearing were not made by Louis Vuitton, and in fact, are counterfeit. Louis Vuitton did not grant permission to Mr. Ross or to whoever did make the sunglasses to use our trademarks. The second is that no affiliation, sponsorship or association exists between Rick Ross or XXL and Louis Vuitton. The third is that counterfeiting is illegal.
Thank you for giving us the opportunity to correct the confusion.
Sincerely,
Michael D. Pantalony,
Esq.Louis Vuitton Malletier
*Waits for comical 50 response*
Posted by Skyywalker at 6:10 PM