So i caught the new Terminator movie the other day and i gotta say it was....ehhhhh. 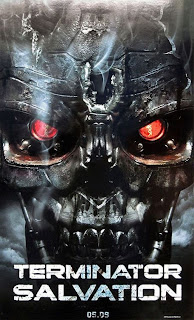 Lemme explain where im coming from though. I've never really been a fan of the whole fanchise (In fact the only one i remember seeing was 2) so I kinda felt like I was on the outside looking in as far as the backstory and what exactly is suppose to be going on.

Once i got pass that it was pretty enjoyable. The action scenes are great and what you would expect from a big summer movie. I was amazed at some of the bigger machines, and they just made me more amped for when Transformers: Revenge of The Fallen drops (The first was MY SHIT)

The best moment of the film was abit of an unexpected cameo. (SPOILERS!!!!)

(Skip ahead to about 4:12 and excuse the poor quality, this was the only i can find)

Overall it was a decent movie, if you're a fan of the fanchise you're sure to enjoy it way more than other who aren't that into it.
Posted by Skyywalker at 1:33 PM