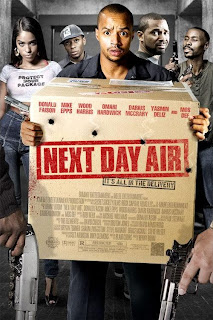 So I caught "Next Day Air" the other day and I gotta say I was impressed by the film. The flim was full of action and laughs and some how managed to give everyone apart of the crowded cast a decent amount of screen time (although i wish Mos Def was featured throughout the movie more, his character was hilarious).

Yasmin Deliz did a great job in her first movie role and cameos by Lauren London and Lacey Duvalle didnt hurt the film at all.

"I think im loving Ms. Lacey...."
Overall, i think the movie does a great job at doing what it's suppose to do and that's entertain. Of course its not the greatest movie in the world, but a great way to start off the summer.